Romeo went completely out of his way for some lovin’.  Apparently, Shakespeare was on to something, because studies are showing that Romeo’s actions were a natural and common phenomena (minus the whole death thing).

Studies conducted by the Jour 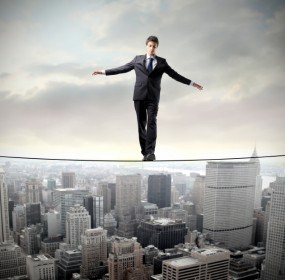 nal of Risk Research seems to confirm this.

Evolution Made Me Do It

According to the authors, “in the evolutionary past, our ancestors were faced with a hazardous environment where they were forced to take greater risks in order to find shelter, food and sexual partners. Thus, individuals who played it safe in that they did not take any risks at all, were unlikely to survive.”

So, guys, it’s not your fault that you have this hard, burning desire to talk to an attractive lady that you see. It’s engrained in your DNA! So there’s no harm in acting out what you naturally desire. Just don’t break any laws.

According to the same study, men tend to take “dumber” risks in the search for sex — men were more likely to have unprotected sex or pull off a risky stunt in order to impress a woman.

None of this is surprising, right?

The fairer sex, on the other hand, were unlikely to engage in anything considered “risky” for romance. Women are just that much more passive, we guess!

So, men, remember to do your best to please those women, but don’t do anything stupid to do it!  If you want to know more tips on how you can get a woman’s attention, check out this article that will help teach you how to pick up those women!