You are here: Home1 / 2 / Marriage3 / 5 Tips For Proposing To Your Girlfriend 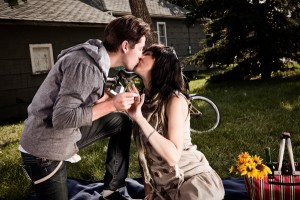 A proposal is an exciting time! So don’t be nervous about it!

She’s the one that you want to be with for the rest of your life. You’ve made your decision. All you have to do now is pop the question!

You want it to be a moment you both cherish and think about from time to time in your long future together.

If you’re stumped on good proposal ideas, you’re not alone, but don’t read one of those “1000 great proposal ideas” articles. Those are crap. Your proposal needs to be original and unique to your relationship with her.

Guys tend to struggle with the whole romantic thing and that’s fine, but you do need to make sure that your proposal is both romantic and you.

This article will hopefully guide you in the right direction and make sure your proposal is done just right!

So let’s start off with the first tip: 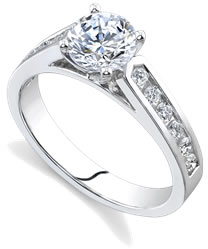 If you’re serious about this, then hopefully you’ll only ever have to buy one in your whole life! So make sure that the one you pick is the right one!

Here are some tips for picking out the engagement ring – try observing the jewelry your girlfriend wears. Surely, you’ve asked her about her jewelry before and noticed what she wears, so you should have a bit of a sense of what she likes and she doesn’t like.

But did you know that going with a round-cut diamond is often better than a princess cut (square cut)? Yes, round diamonds just look larger and it’s a cut that will never go out of style. In terms of bang for your buck, the round style is a great way to go!

And instead of going for an expensive platinum band, go for white gold or palladium. Platinum bands are often extremely expensive, and to be honest, it’s not the most important part of the ring! Focus on getting the right stone, then worry about the band.

Pro tip: If you’re really unsure of what to get her, involve her best friend! Not only will she have a more confident idea of what your girl will love, she can also do reconnaissance and even find out exactly the ring your future wife wants to wear for the rest of her life!

You don’t have to do a silly flash mob YouTube video, though to be honest, some of them just melt my heart!

Okay, maybe you don’t know how to dance that well.  Or maybe you don’t have any really redeeming YouTube friendly talents. That doesn’t mean you can’t propose to your love memorably!

But the first thing you want to think about is where you’re going to propose. Do you want to do it in a public place, or somewhere private? Wherever it is, make sure it’s a place that’s special — maybe the place where you had your first date, or her favourite park on a beautiful day.

Remember, extravagance doesn’t mean the best location for a proposal – oftentimes the location that has meaning behind it will mean more to her.

If you’re still stumped, then think about locations where you’ve both shared a ton of romantic occasions. It could be a picnic spot or a place on the beach.

Alternatively, think about a deep-rooted passion you two share. Is it wine-tasting? Well, take a day trip to a gorgeous vineyard nearby. Is it nature? Think of a beautiful, scenic location. Is it being active? Do it at a sporting event.

The possibilities here are endless.

3. If You’re the Extravagant Type 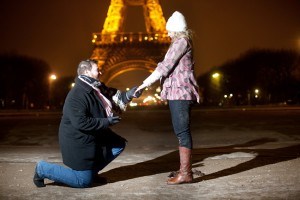 The City of Lights is one of the best places in the world to propose!

Then you can have a lot of fun with the location. Are you two planning a big trip somewhere? A proposal on top of the Eiffel Tower in Paris or on the Spanish Steps in Rome will be unforgettable. Or how about a cruise?

If you’re going for full-out extravagance, you can even get “helpers” for your proposal. Maybe come up with a clever scheme to surprise your potential fiancée. Hire a skywriter to spell out “Will you marry me?” while at the park for a picnic. Purchase an ad on a billboard.

Going to an aquarium? Hire some divers to send out your message underwater with some well-placed signs.

Or, again, you could do some sort of flash mob dance, but I’ll leave that up to you!

What you wear is going to be just as important as where you propose!

Yes, proposals are supposed to be special, so don’t wear your oldest t-shirt and those jeans.

Surely you’ve gone shopping with your girlfriend before. Wear something that she picked out for you. And dress appropriately for the location. If you’re at a fancy restaurant, wear a suit. In fact, find an excuse to wear something really nice and semi-formal for the occasion! You won’t be giving anything away.

5. Lastly, Remember That Some Traditions Should Never Die 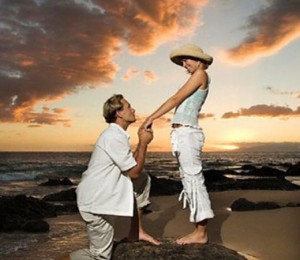 Good luck! If you follow my advice, she’ll have no choice to but say “YES!”

Whatever you do, make sure that you don’t forget what a proposal is: it’s all about a man deciding that he wants to spend the rest of his life with one girl. So make it special for her.

Go down on one knee and look at her for a few seconds. Soak it up!

There’s only going to be one proposal, so make sure that you look into her eyes and let her see what you’re about to do.

And when you say the words, Will you marry me?, say them with passion, with heartfelt meaning, and say them slowly. Don’t rush it! I know you’re going to be nervous, but this isn’t something that you want to just “get over with.”

And for goodness’ sake, say it like you mean it!