You are here: Home1 / Dating2 / What to Text Him When He Bails On You

There are few feelings that compare to the one you get when the guy you’re into bails on you. On one hand you want to be the cool, understanding chick that’s “totally okay” with him cancelling on you. On the other, you want to let him know that you’re upset with him, even if his reason for flaking is completely legitimate.

The big question here is, what do you text him when this happens? You may not realize it, but this is a make or break situation.

Put yourself in his shoes 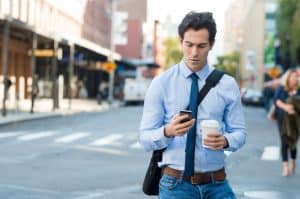 Picture this: you have plans with a man, and hours before you’re meant to meet him you get a phone call from your best friend. Her car is broken down in the middle of nowhere, the nearest tow service is closed, and she has no way to get anywhere.

Being a good friend, you agree to go and rescue her. This however, means cancelling your plans. Messaging the guy you’re meant to meet, you realize how made up your excuse for not making it sounds, but since it’s the truth, you go with it anyways.

He replies to your text with a short:

“Not a problem, you’re a good friend. Let’s catch up this weekend when you’re free. Drive safe!”

Reading this kind of message will have you swooning, and wishing you could be spending your night with him.

OR, he replied to your text saying:

“Are you kidding me? That’s cool.”

Reading this message quickly gets you defensive and you can’t believe what a selfish jerk he’s being. In fact, you probably don’t even want to see this guy down the road, because why would you? What’s tough about this kind of response though is that you can’t totally tell what he means by it. Is he being rude, or is he genuinely surprised by what you’ve told him? Do you detect some passive-aggressive undertones?

Worried He’s Pulling Away? Click here to take my free diagnostic quiz and find out whether or not he likes you!

Since it’s so tough to interpret tone in texts, it’s important that the ones you’re sending him are crystal clear and positive, the kind of messages that will make him want to see you again and maybe even make him feel bad for bailing.

This means that no matter how you’re feeling, it’s important to not blast off an emotional or passive-aggressive reply.

As much you may feel he’s being inconsiderate or want to beg for him to reconsider, do not do this. Instead take a few moments to cool your jets and remember, it may feel like the end of the world right now, but it’s not.

The next thing you’ll want to do is to compose a positive text message that lets him know it’s fine that he can’t make it tonight – again, this is easier said than done, especially when you’re feeling disappointed.

So, why do you want him to think that you’re okay with him bailing? Well, there are two reasons.

The first is that it shows him you have other things going on in your life, so him not being able to see you isn’t that big a deal. Instead, you’ll happily carry on without him.

The second reason is that it shows him you’re level-headed and understanding. The kind of person who gets that sometimes life gets in the way of other plans, and that’s totally cool. Unlike the type of chick who loses her mind when things don’t go according to plan, because no man wants to be with someone like that!

He’ll not only appreciate how mature you’re being about the situation, but even if he feels his reasons for bailing are justified, deep down inside he knows that there’s still a chance you’ll get upset or be angry with him. When you take away this sort of stress or fear by again, letting him know that you’re okay with him bailing, it will make him WANT TO see you again!

What should your text say?

Now, as for the actual message you’ll be sending him when it bails, it’s composed of three parts.

The first part lets him know that it’s fine he’s cancelling on you; the second part tells him you’re busy for the next few days, and the third part wishes him well.

You may be wondering where this whole “you’re busy for the next few days bit” came from, and why you should say this.

Well, hear me out. Even if you have nothing going on over the next few days it’s CRUCIAL that you say otherwise. Giving the impression that your life is full and exciting is important because it’ll make you seem interesting and make him want to be a part of your fun lifestyle, and it also shows him that you’re not sitting around waiting for him to come calling because you’re wayyyy cooler than that!

Hell, he may even feel that if he doesn’t act fast then you might meet someone else who will come along and sweep you off your feet.

Take the power back

So, regardless of how tempted you may be to reschedule with him for the next day, it’s important that you play a little hard to get here, and instead be busy with something else. This means you should ACTUALLY make other plans, and go out and do something.

Don’t say you have an epic evening planned then sit around and do nothing. Instead find something to do, so when you do eventually meet up with him you have something interesting to chat about. A rule of thumb I like to suggest is to make him wait at least 48 hours after cancelling on you before seeing him. Doing this will keep him interested and you on his mind.

The “calm and cool” text

So then, when you text him after he bails on you, your message should read something along the lines of:

“Hey, that’s okay, I understand you’re busy. I also have a lot going on these next few days, but if you want to catch up this weekend I’m available. I hope you have a good night!”

If he gives you a specific reason for not being able to see you, then you can incorporate it into your message. For this example, let’s say he tells you he can’t make it because he forgot he about a surprise party for his uncle. Here you’d say:

“No worries! I hope the party goes well. I have a lot going on this week, but maybe we can catch up in a few days. Have a great night!”

If you’re at a point where you’ve decided you don’t want to reschedule with him and that his bailing on you was the last straw in your books, it’s still important to keep your message positive. As much as you may want to let him know that you’ve had it up to your eyeballs with him and his excuses, don’t. Instead, send a quick message:

“No problem! I hope you have a great night!”

The “break the cycle” text

Lastly, if this guy has a history of bailing on you last minute but you DO still want to try and make things work between the two of you then you may want to make him aware of your frustrations IN A POSITIVE WAY.

I know I said you should play it cool, but I get it ladies, there’s only so much you can take until you feel your calm, cool demeanor is being taken for granted.

So, make it known that his repeated flakiness isn’t working for you by sending him a message. You can say something like:

“Hey [insert name], I’m bummed you can’t make it but I totally understand that you have a lot going on. In the future, please keep in mind that I’m busy too and I would appreciate it if you gave me more notice when you have to cancel so I can make other plans for myself. I hope you have a great day.”