You are here: Home / Dating / How To Date Multiple Women At Once

Every guy’s dream is to date a lot of girls at one time. In fact, a lot of men’s fantasies is to simply have sex with more than one woman at once.

A lot of men think this is almost impossible to do, but it’s not. In fact, it’s actually straight forward.

Now, I’m not talking about manipulation and lying to a girl. That isn’t right. Unless you like the sort of drama that comes when you lie to a girl, then I highly suggest you don’t do this. A lot of pain will come with the pleasure, I can guarantee it.

So you’ve got to be upfront about your intentions. I suggest that when you start dating a girl, you say something alone the lines of this:

“You’re a great girl and I’d love to continue dating you right now, but I’m not looking for anything exclusive at this point. If you want to try dating other dudes while you’re with me as well, I’m totally cool with that.” 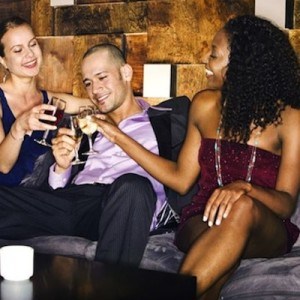 Now, one of two things will happen. The first scenario is that this chick will totally dig you for saying it, and will try and win you over.

This is when you know you’re in the clear. This is awesome if you want to date multiple women at once.

She’ll get completely turned off by the notion of you dating other women while you’re with her. She’ll either just completely ignore you and scram or she’ll just want to just be friends.

I’m going to assume that this chick will be okay with you dating other girls for now (after all, you two just met, right?). So go ahead and date other women while you see this girl. However, don’t rub it in your face that you’re going out to meet other girls.

Better To Keep Quiet Unless She Asks

Unless she asks you specifically, don’t even mention the other girls yet. For all you know, she’s dating other guys too, so don’t worry about it.

Also, it helps if you make sure that both of these girls are from two completely different social circles. In fact, you don’t want them talking to each other. This is completely horrible and bad… and you don’t need to be a human geneticist to realize this.

Thirdly, you’re going to want to use the same jokes, buy them the same presents, and do everything the same. You’ll want to minimize the risk of you getting caught.

Don’t mess this up. So if you decide to buy a gift for one girl, buy the same one for the other girl too. You’ll thank me later for this.

Fourth, keep your plans hidden. Don’t tell her or show her your schedule. That #$* is private information! You’ll also want to keep tabs on your weekly plans. Stay on top of that stuff! You don’t want to double book.

Make sure that when you plan your outings with your respective lady friends, you don’t want to go to the exact same place over and over. Switch it up. That way, you’ll reduce the risk of a mutual friend seeing you with a bunch of different girls! Not good!

Finally, you will inevitably meet a girl that I call a Backstopper. These girls will confront you about your relationship with her and ask you about the “other girls” that you’re dating.

Be truthful with what you’re doing. If you’re not interested in being exclusive with her, then gracefully let her go.