All couples argue and fight from time to time; that’s just human nature. In many ways, this is a healthy part of a relationship because it gives a chance for the two partners to express some of their emotions and frustration, and to stand up for themselves. Small irritations and frustrations that are neglected for long periods can fester and become much more serious problems, serious enough to threaten the whole relationship.

And it is important for each person in a relationship to learn to ask for what they need, and to sometimes push back on something they aren’t happy about. This is psychologically healthy – if you never complain about anything, and never say no, you become a pushover, which isn’t good for you or your partner.

Having said that, it’s important to remember that fighting isn’t always a good thing. There’s a right way to fight and a wrong way to fight. Or, more accurately, there are lots of wrong ways to fight!

When fighting takes over the relationship, dominates it, and becomes a substitute for other forms of communication, that’s a toxic situation. And when fighting becomes particularly vicious and vindictive, or even physically violent, that, too, is toxic.

The healthy purpose of fighting is to “clear the air” and maybe get a few frustrations off your chest – to say things you might not easily say during a calm conversation. Think of a political debate in government. There’s productive debate, which can lead to compromise and forward progress, and then there’s vicious, scorched-earth partisanship that just ruins government. You can pretty easily tell the difference.

If fighting in your relationship has already reached the destructive, toxic stage, where you shout horrible, personal, deeply wounding attacks at each other, what can you do?

First, you need to stop the violence. Both of you need to work together on this problem, but even if your spouse or partner won’t stop, you can stop by yourself. You can change your attitude and stop engaging in these battles. It takes two people to have an argument.

Work on some defensive strategies you can use to de-escalate an angry situation. Go to another room or leave the house if you must, in order to have time to calm down and think of what you want to say. This is not at all easy and will take practice and hard work.

When your partner says something particularly nasty and vicious to you, it is very difficult to bite your tongue and say nothing in return. It is natural to want to defend yourself or to lash out and hurt the person who is hurting you. But try hard to get to a safe, quiet place where you can recover. 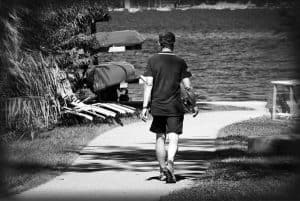 Be polite but firm, even against a partner who keeps trying to engage in the fight, shouting, “Don’t you dare walk out on me!” or “Are you too afraid to fight back, you coward!” Stick to your message – “I need some privacy to calm down.”

Avoid turning your departure into some kind of sense of superiority you can use as a weapon against your partner, though. Just repeat your simple message – I need some time to think and calm down – and get to a quiet place.

If you’re overwhelmed by anger against your partner, take some time to drain that poison by writing down everything you’re angry about, every stupid thing you think they’ve done, every hurtful thing they’ve said. Then destroy that paper. If you need to punch a pillow, or yell, or run a few miles to let some of your anger out, by all means do that. Whatever it takes to give yourself some perspective.

Then, write down what you want to say – even scribbling it on scratch paper will help you express yourself and organize your thoughts. It’s helpful if you also write down what you think your partner is so upset about. Try to get to the simple core of what’s bothering each of you.

Once you’ve written down what you want to communicate, you can either throw the bit of paper away or retain it as something to read aloud to your partner. Sometimes reading from a prepared statement is easier than trying to talk when there’s a risk you might lose your temper.

At some point, you will want to try and set up a safe meeting with your partner. During this meeting you can tell them what you wrote down, tell them the exact message you want to communicate.

The purpose of this quiet period (it can be anything from a few minutes to hours or days) is to slow down the rapid, out-of-control chain reaction explosion of your fighting. Slow, deliberate communication, by writing if necessary, is much less likely to result in a brutal fight.

Once you’ve managed to do this a single time, it will get a little easier. But you will probably be tested a few times, and it’s likely you will fail to bite your tongue sometimes. Don’t be too hard on yourself – but keep trying to de-escalate fights and calm down before talking to your angry spouse or partner. 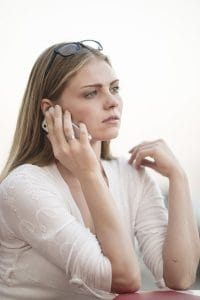 Find A Better Way To Communicate

Over time, you will both want to work on a new and better way to communicate with each other. It may be so bad right now that writing notes to each other is the only way to do it. If that’s what it takes, then so be it. But a better way is to set up some rules for how you communicate.

Get a sand glass timer or use the one built into your phone, and take turns talking to each other. Each partner gets three minutes to say whatever they want, while the other person says nothing at all and just listens. Then you reverse roles. Artificially slowing down and structuring your conversation forces you to actually listen to what the other is saying, rather than shouting them down before the words are even out of their mouth.

Sometimes Outside Help Is Necessary

If the situation is still too serious, you will need a professional counselor or therapist to act as a referee and keep you both safe. Don’t be afraid to ask for this kind of help. A referee won’t stop you from arguing, any more than a referee keeps two boxers from punching each other. But a referee will make sure you follow some rules to keep your bout safe and productive. No low blows or kicking or ear biting, or the verbal equivalent of those things.