You are here: Home1 / Relationships2 / How to Deal With a Very Moody Girlfriend

Some men don’t understand how to handle a girlfriend who is moody or unpredictable, and this can lead to lots of fights or even breakups. Of course, there are plenty of moody men out there, too, and they aren’t always easy to get along with. But dealing with a particularly moody girlfriend can be quite frustrating. What’s the best way to handle such a situation?

First of all, it’s very important to accept that you don’t have any control over your girlfriend’s emotions, or over anybody’s emotions at all. Many of us struggle to even control our own emotions, and we have no hope at all of ever controlling somebody else’s feelings.

The Complexities of Emotions

Emotions are complex things, caused by interaction between the outside environment and our own particular internal environment. And they can’t just be changed by throwing a switch. Think about it. Was there ever a time when you were unhappy, but your friends kept telling you the opposite, telling you why you should be happy? No matter how many reasons they gave you to try and make you happy, it didn’t work very well. 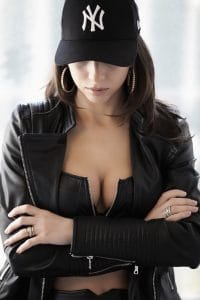 Your girlfriend’s unpredictable, stormy, mercurial moods are the same way. No matter what you see from the outside, she is feeling something different on the inside – she’s furious, or miserable, or frightened, or embarrassed, or irritated, or overjoyed. That’s how she feels. That’s her reality right now. For you to step in and try to change that isn’t going to work very well.

This approach might actually work some of the time. Perhaps, once you’ve explained to her why she shouldn’t be upset, she stops being upset. Maybe when you say, “Don’t cry, you have no reason to cry,” she sniffs, blows her nose with a tissue, and says, “You’re right” and stops crying. But this isn’t going to happen all the time, and this approach is still problematic because you are constantly telling your girlfriend that her moods are “wrong.” Over the long term, that message will have an effect on her. It may eventually start to drive her crazy.

Our emotions are an important part of our lives and our personalities, and denying such a powerful force doesn’t work out well over time.

A different approach is needed. What you can do is to try and stop focusing on what’s out of your control and start focusing instead on what is within your control.

As I’ve just explained, your girlfriend’s moods are pretty much beyond your control. They might even be beyond her control.

Your own emotions, your own moods, are much more likely to be under your control than your girlfriend’s moods. I’m not saying you can always change how you feel, or tame your temper in every situation. But you have a far better chance of changing your own emotional state than you do of changing hers. So it’s a good idea to focus your efforts where they can do the most good.

Study your own reaction to her moods. When she is unhappy, do you immediately feel stress because it is your job, or so you think, to “fix” her emotions? Does that stress make you irritable or angry? It is all too easy to wear yourself out if you are always trying to control and “fix” how your girlfriend feels. That’s a full time job, and it leaves you no time for your own life and your own needs.

Don’t Be Dragged Down, Too 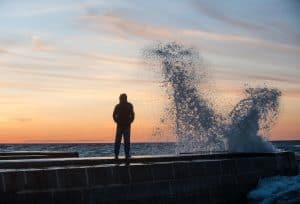 Try to disconnect your own happiness, your own serenity, from her moods. I know this is much easier to say than to do, but it is something you can work on and get better at. Focus on staying cheerful and upbeat even when she is unhappy. I don’t mean that you should try to make her cheerful and upbeat. Just try to keep from taking her emotions on yourself. Don’t be sad just because she is sad. If she is angry, don’t snap back at her and start a fight. If you need some space to keep calm when she is upset, by all means take that time and space. Don’t be a jerk about it, just be calm and step away for a short time, take some deep breaths, and let her emotions run their course.

Some of her moods, if they are very powerful, may have a strong negative effect on you, particularly if she lashes out at you or blames you when she is sad or angry. Try not to take it personally, and talk to her when she is calm about how her emotions affect you. There’s nothing wrong with speaking up for yourself. Just don’t let this conversation become an attack on her.

Be clear about your own boundaries, about what is OK and not OK. Assure her that you love her, and that her stormy temper is part of her and you don’t necessarily want to eliminate it. But let her know, for example, that screaming purple faced at you because you forgot to take out the garbage is too much.

It’s not an easy path to walk, letting go of trying to control your girlfriend’s feelings while still trying to protect yourself appropriately from them. Just keep in mind that her feelings are not caused by you and are not controlled by you. Nor can you cure them.