You are here: Home / News & Research / The Science Of Lying: 5 Ways To Detect A Lie

Have you ever thought someone was lying, but didn’t have any hard evidence and therefore decided not to call them out on it?

Have you ever seen someone you know twitch and fidget when being asked a question, thinking they were probably nervous about the big fat lie that was about to come out of their mouth? 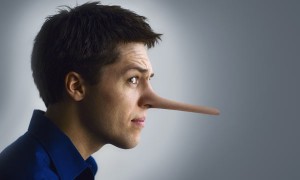 In this post, I’m going to take a brief look at the science of lying.

First, let’s talk about how you can’t spot a liar.  You can’t, for example, determine someone is lying based on a few bits of body language.  If anyone tells you that there’s a 100 percent surefire way to spot a liar, then they’re either mistaken or they need to take a look in the mirror.

Much of the traditional belief about lying has actually been proven to be incorrect or, at the very least, unreliable.

Things like pupil dilation, stuttering and frequent blinking might be indicators that someone is lying. But it’s a lot more likely they’re just in a dark room, have a speech issue or have allergies that affect their blinking habits.

In other words, there’s no single way to spot lies, and you should never use body language alone as a way of determining for certain whether someone is being truthful.

What does the research actually tell us about lying? What do the experts, like police investigators and behavioural psychologists, look for?

1. Identify differences from a person’s normal habits and body language

Having a “baseline” to compare a person’s behavior with is absolutely critical.  For example, some timid people might tend to break eye contact frequently, or blush at the simplest of questions.

If that’s the case, then clearly these couldn’t be used as evidence that this person was lying.  It’s almost always crucial that you know the person and their speaking habits for you to be able to notice subtle changes in mannerisms that might indicate a fib.

2. Look for a Combination Vocal Cues, Changes in Mannerisms and Nervousness.

According to research from Aldert Vrij and his colleagues, who conducted a study on detecting lies in adults and children, even a combination of these things may not be enough to spot a lie. Clearly, the more visual and behavioural clues you see in a person, the higher degree of confidence you can have in the belief they’re lying.

3. Look at Minute Details in Expression and Mannerisms

According to some research, the most the most competent professionals look for tiny, subtle details in a person’s facial expression and movements. 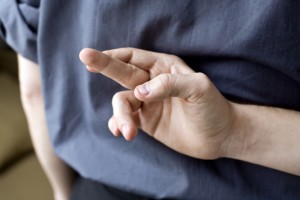 4. Pressure and Repeated Requests for Clarification

While I don’t recommend shining a light in someone’s eyes and grilling them with a series of tough questions, asking for clarification and prodding for more information might be helpful in forcing a liar to come clean or reveal some hidden cues.

5. Understand Everyone Is Different

No two people are exactly alike, and some people are very good at lying while others are terrible at it.  As a result, detecting lies can be difficult, especially if you don’t know the person or if they happen to be blessed with skills that make him or her a good liar.

Need more help in your quest to become a lie-buster? Here’s what the FBI has to say about detecting lies (warning: it’s long!).

If you’ve got other tips on how to spot a liar, share them in the comments section below!