You are here: Home / News & Research / Does Being Overweight Cause Relationship Problems?

Have you ever wondered whether being overweight can cause conflict in romantic relationships?

Well, wonder no more. A recent study conducted by scientists at the University of Puget Sound, University of Arizona, and Hanover College investigated this issue. Their conclusion, unsurprisingly, revealed that obesity is often correlated with conflict and arguments among “mixed-weight” couples: 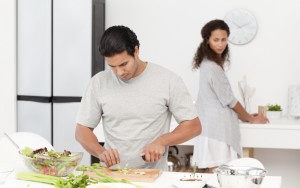 This indicates that in couples where one person was considered more obese than the other, there was more conflict within their relationship when compared with “normal” couples.

The findings suggest that conflicts arose even more often around mealtimes, perhaps indicating that criticisms over eating habits may have led to arguments or conflict.

The increased likelihood of arguments or conflict in a relationship was negated by supportive partners, however, which actually suggests that it may not be an insurmountable issue for couples:

These findings suggest that mixed-weight couples may experience more conflict than matched-weight couples, but perceived support from the partner can buffer this conflict.

This research suggests that interpersonal dynamics associated with mixed-weight status might be important for romantic partners’ relational and personal health.

In other words, if the obese person feels supported by their partner, the chances of argument and conflict is reduced.  By offering support and helping their partner overcome eating and obesity issues, the relationship can be strengthened further.

This is good news for most of us, because both men and women tend to gain weight after entering into a devoted long-term relationship.  This change in appearance can lead some people — women in particular — to “threaten” their partners with an ultimatum.

According to Dr. Laura Triplett, an assistant professor at California State University-Fullerton, young women are most likely to take action against their overweight partners:

…women in their 20s in particular stop having sex with their partners when they don’t meet their idealized notion of what a man should look like. 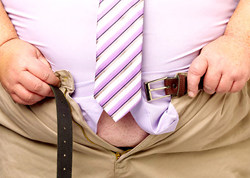 This type of ultimatum typically fails to achieve the intended results.

And it’s also likely to lead to greater conflict and relationship problems, making it an unwise course of action if your partner is overweight and you’re trying to make them change their lifestyle or eating habits.

Veronica Monet, a sexologist who specializes in relationship dynamics, suggests being honest and sharing your feelings truthfully with your partner.  She also suggests turning the scenario around, offering your spouse or partner an incentive, such as a reinvigorated sex life. Something like:

“This thing isn’t working for me, would you be willing to change it? I would be so turned on if you lost 20 pounds.”

The big reward any man gets is female approval.

Doesn’t that sound a whole lot more appealing than saying, “if you don’t lose weight, I’m going to stop having sex with you”?

As with other causes of relationship conflict, the best policy for dealing with weight gain is honest, truthful communication.