You are here: Home1 / Just For Fun2 / The Most Romantic Pick Up Line Ever

So what’s the most romantic pick up line in the world?

Listen. Pick up lines are becoming a little obsolete in the world of seduction. Why you ask? Because hot girls are expecting pick up lines. They’re grossly overrated. I know some guys that can pick women up by barely saying a word. 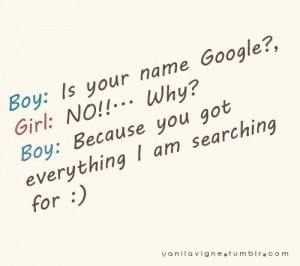 How’s that for romantic?

I hate to break it to you guys out there who love the romance — romantic pick up lines don’t work!

And, to be honest, if you’re good looking, it doesn’t even matter what you say a lot of the time.

That’s not to say that being romantic isn’t important (because it is), but opening up with romance is something that should only be saved for the movies.

So what do you say?

When you see a girl, what’s an effective pick up line that almost always works?

How about “Hi!” followed by an open ended question about the venue. How’s that for simple? Here’s the thing — pick up lines are flawed. When a girl hears a pick up line, she’s secretly thinking, “F*ck off. I don’t have time for this.”

You need to appear attractive first before you get into the flirting. So just introducing yourself first and asking an open ended question doesn’t pose a threat at all.

You can even include what is known as a “false time constraint” by saying you have to “go in a second.” This will further prove to her that you’re not really interested in picking her up at all. How’s that for being inconspicuous.

Get a Good Conversation Going, Man

Your goal at the very beginning of an interaction should be simple, sweet, and get a good conversation going. Once that happens and you sense that she’s into you, then you can start dropping flirty lines here and there. That’s when you can start touching her. And that’s when she’ll be receptive to your cheesy romantic stuff.

Trust me! I’ve been through this!

So the next time you’re at super market in the frozen section and you see a really hot girl, don’t ask her:

“When you fell out of heaven. Did it hurt?”