You are here: Home / Dating / When and Where to Touch A Girl You Like

Touching is one of the best ways to flirt with a girl. But what many men don’t know is when and where to touch a girl that they like.

Most men, as our surveys have shown, are simply too afraid to touch women. They’re afraid of rejection and they fear that they’ll make a woman feel uncomfortable.

And most of the time, their fears aren’t unfounded. If you touch a woman incorrectly, she will get uncomfortable and she will probably tell you to piss off, unless you present yourself in a fun, flirty, attractive way.

Put Your Creep Away 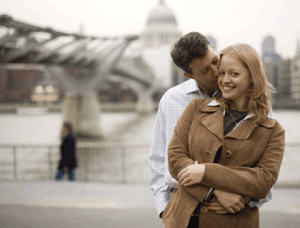 See, in order to properly touch a woman, you have to pose as, should I say, not a creep.

That means you have to make sure you’re well groomed, that you dress well, and that you don’t come across as needy. If you do come across as one of those regular guys that puts the woman on a pedestal, then you won’t be successful when touching a woman.

You need to pose as if you don’t care about the girl, and then touch her.

This doesn’t really seem to make sense, does it?

It’s because attractive women have men trying to touch them all the time. And these men come across as creepy. So what you need to do is the opposite of what these men are doing. Only then will you be able to get her attention.

So first, what you need to do is make fun of her. I always like to picture her as being like my little sister. Tease her. “Neg” her. Criticize the way she’s doing something but in a very cute way.

Once you’ve done this a few times, then you can start touching her. But where? And when?

Start the Touching in Non-Sexual Areas

Well, if you’ve just met a girl, then obviously you don’t want to touch her in a sexually erogenous zone (yet). You’ll want to touch in her in non-sexual spots like her arm and shoulder. But do this casually. Don’t linger for too long – that comes later.

So when should you touch a girl? Touch a girl only when you know she’s feeling emotionally aroused. That is, when she laughs or smiles.

If you do this properly, she’ll associate your touch with happiness. If you do this enough times, then eventually, your presence will make her happy.

Sounds pretty scientific, huh? Well, it is. In fact, there’s a whole science of attraction. Check out the page I made about this topic – in it, it goes over the very best attraction methods that you can use today to start attracting more women (and sleep with more women).

Now, who wouldn’t want that in their lives, right?