You are here: Home1 / Dating2 / Reader Question: Is He Playing Hard to Get, Or Just Not Interested?

How can I tell if he’s playing hard to get or just not that interested in me? Any help is appreciated. Thanks!

Love and romance are a game for many people, a frequently fun but sometimes stressful guessing game. Does he like me? Is he playing hard to get? Or is he just not interested in me?

Because so many people treat love as a game, one they love to play, things get complicated when we try to figure out what they are really telling us.

He smiles at me, likes to spend time with me, touches me on the arm – does that mean he is interested in more? Or does he see me as just a safe friend to hang out with? 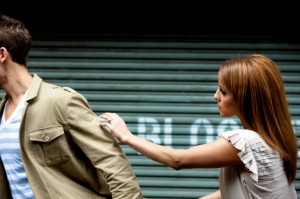 Or, conversely, he seemed to have fun the last time we went out, but he hasn’t called or emailed or texted me. He hasn’t friended me on social media. What does that mean? Is he playing hard to get?

Answering these questions is never easy.

Actually, that’s a lie. Answering these questions is the simplest thing in the world – if you’re brave enough, that is. Few people are that courageous.

Want to know if he likes you? Ask him. Be direct – that’s the adult way to approach the situation. “Hey, when we went out last week, you seemed to have fun, but since then I haven’t heard a peep out of you. What’s going on? Are you interested in going out again, or not?”

You should be able to clear up any uncertainty or misunderstanding with a few quick, direct questions.

So why don’t more people do that?

Well, the number one reason is that being so direct is quite scary. It takes a lot of guts to ask those sorts of questions. Not many people are that brave.

Another reason is that some people feel being so direct ruins the game. There’s something to be said for that, surely. Much of the fun people get out of the romance dance is from not knowing exactly what’s going on in the other person’s mind.

People enjoy drama. They love to call up their girlfriends and talk, talk, talk about this guy. They love to rehash every moment they spent with him, to go over every detail, no matter how trivial, of his behaviour, and to ask for advice.

That’s all fine – it’s part of the game, part of the fun. Does he like me? What do you think? Your friends will enjoy themselves interpreting his baffling, bizarre behaviour for you.

But when the drama gets a little too heavy for you, when not knowing starts to bother you, keep you awake at night, then what do you do?

Most men – nearly all of them, in fact – evaluate every woman they meet as a potential sexual or romantic partner. He knew as soon as he met you whether he was attracted to you. And he decided immediately whether he was interested in sleeping with you or not. So you can be sure that he probably knows what he wants, even if he’s not telling you.

There are lots of subtle (and unsubtle) cues men send off when they’re attracted to someone. Laughing and eye contact, touching you on the arm or shoulder during a conversation – these are common telltale signs of interest. He may ask you many questions about your life, your work, your interests. These are all good signs, provided you’re interested in him, too.

The confusion sets in when either or both of you decide to play a game to make sure the other person is attracted to you. Playing “hard to get” is a common strategy used by both men and women.

Many men believe that the surest way to attract a woman is to ignore her. Some of them are insecure and think they need a strategy like that to attract someone. Others are experienced, confident players who do it as a matter of routine.

Freeze Him Right Back

You have several choices if he’s ignoring you. One easy option is to ignore him right back. Play the same game. If he’s really interested in you, even a bit, he will come around sooner or later. He’ll contact you. If he doesn’t, you’ll have your answer.

Playing it cool like that is probably your best option. You increase your own value and desirability by ignoring him, making him do the work. Women have known this and practiced it successfully for centuries. It really works.

Men value something they have to work for. It sounds trite, but it’s true. In traditional societies in the past, men did the hunting, and they still enjoy the hunt today – it’s bred into their DNA.

Playing it cool is also a way of letting him know you don’t like his games. You send a pretty clear message that you aren’t easily manipulated.

Doing the opposite – constantly calling or texting or contacting him – sends the opposite message. It makes you come across as insecure or even neurotic. Right from the start, you’ve put yourself in a subordinate position.

You don’t have to be totally silent. After you see him, send a single, polite, short note, saying thank you and telling him you enjoyed yourself. Then stop. You’ve let him know how you felt – now it’s up to him. If he is attracted to you, he’ll let you know. If he wants to see you again, he’ll ask you out.

Those are your options. Play it cool or be direct and grown up and ask what’s going on. If you don’t feel brave enough to be direct, or if you worry about coming across as a strong, assertive woman, then just play the silent game.

But you might ask yourself – if you are a strong, assertive woman, do you want to date someone who isn’t comfortable with that?

If you’re dying to know what he thinks, ask him.