You see an attractive girl. She’s looking at you. You smile at each other. But what do you do next?

How on Earth are you going to get a conversation going?

Well, you’re in luck because what I’m about to tell you is advice that a lot of men will never know in their lifetime. It is the Art of Conversation!

Yes, talking to a woman is where all the magic happens. And, depending how good of a conversationalist you are, it is where a woman decides to sleep with you or not. If you’re a smooth enough talker, you can get anyone to do just about anything.

Ever heard of a guy named Grigori Rasputin? He was some random, crazy Russian dude who seduced the Russian Queen during Tsarist Russia in the early 1900’s. This guy was so smooth, that he actually convinced the queen that he was a mystical healer that could use magic to heal her sick son. Let me preface this by saying, Rasputin was one ugly motherlover.

Obviously, the guy was full of it, but he was as Usher says, “A True Player For Real.”

Here is a list of things you can do to really get a conversation going with women! 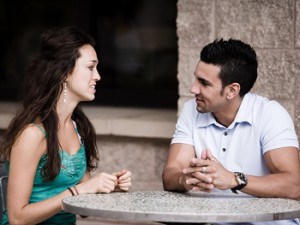 Yes, when somebody talks too quickly, they just look nervous, high-strung, and to women, this is a huge turn-off.

See, hot chicks are always used to guys all nervous and weak around them, so the slower you talk, the more calm and collected you’ll see, and the sooner you’ll be in bed with her.

See, guys who aren’t that good with women make it so obvious that they’re interested. They’ll lean in and talk to a girl. They’ll try and get as close as possible, but sorry to say, this just turns women off. Learn to lean back while conversing with women.

Take a page out of Medusa, man! Conversation is all about engaging your audience, and part of getting a girl to engage is to look into her eyes while you’re talking to her.

This is the easiest thing to do. Smiling is psychologically proven to make people feel more at ease.

See, beautiful women get hit on a million times a day, and most of these guys are try-hard, nervous wrecks. You need to come off as a fun and cool guy, and smiling helps you do this.

5. Touch Her but Not In a Creepy Way

Don’t be afraid to playfully whack her or hold her hand for a split second. If you watch guys who are really good with women, you’ll see that they touch them often. But they touch them in ways women want to be touched. This means no groping (yet), no touching of her more intimate areas, and no touching for a prolonged period of time. Just engage in light-hearted, fun touching.

6. Talk About Things That Interest Her

That means don’t talk about video games, cars, or the hockey game (unless, of course, any of those genuinely interest her). Talk about social life, friends, relationships, couples, and life goals.

Tell her about your ambitions. Tell her about all the cool places you’ve been. Take her to that fantasy fun world and never look back.

But look.  The Art of Conversation isn’t all that simple. There’s actually just so much more to it.

It’s an incredibly useful skill to have!