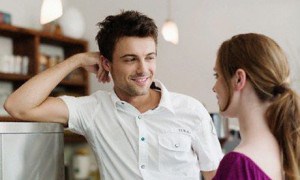 Dealing with guys can be tricky, especially when you’re trying to find out if he likes you. It’s hard to play detective and look for clues in his words and actions.

It comes with the territory, after all. I think guys should be the one to get the ball rolling first, then let the girl reciprocate.

So we’re always on the lookout for any sign of hope that we have a shot with you. And if we think there’s a good chance, we consciously (and unconsciously) put out signs that we’re into you.

But I know that on a lot of levels, you don’t just want to know if he’s “got the hots for you.” It goes DEEPER than that.

You also want to know he’s interested in building a meaningful connection with you.

You need to be sure that, more or less, he’s going to stick around even when things get messy.

That brings us to the heart of the matter. Now, I’d like to give you a quick guide on the things you should watch for to know if he wants to ask you out.

1. He’s Looking For An Opening 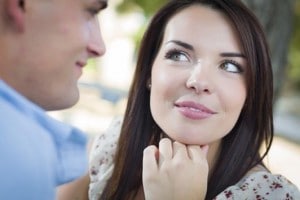 If a guy likes you, listen to what he says when you’re talking with him. He’ll work in the possibility of going out at every turn.

He might mention some cool event he went to, or one he’s going to at some near point in the future. It could be a fun activity he did recently and he just wanted to “share” his experience.

It’s at this point where he’ll be waiting for your response. So you can throw out something like, “Sounds interesting! We should probably check that out next time…”

That will give him the green light to officially ask you out. He just needs a favorable response from you – then sit back and let him do his thing.

Keep giving him some more subtle clues until he gets it. Just don’t cross the line by being the one to invite him – let him do his job.

Remember, this is a back-and-forth game. Put the ball in his court so to speak, then give him the chance to “return serve.”

Do you ever get that vibe when someone’s looking at you? If you’re getting that from your guy, it’s probably because he’s planning to make a move.

It helps to keep in mind that guys primarily operate on a visual level. So he’ll appreciate your stunning looks first and foremost.

Of course, it’s your personality that seals the deal for him, but you’ll forgive your guy for noticing your physical beauty upfront.

At this juncture, you should be making some moves of your own. Give him little visual cues that it’s “game on!”

That includes tucking your hair behind your ear or touching your neck. Scientists call this preening, which is basically the act of “straightening yourself out” when you’re around someone you like.

This has a powerful, unspoken effect on a guy. So if you catch him looking at you, don’t be afraid to throw him this little clue.

His subconscious will pick it up before he knows what’s going on.

Let’s be honest: women want their guy to put them at the top of his list.

This is something you should keep an eye on. When a guy’s smitten, he’s more than WILLING to block out large chunks of time in his weekly calendar for you.

For example, you know there’s something going on if he’s a busy guy but he’s STILL chilling with you.

Or maybe he’s had a long day BUT he’s sending you cute little emojis in your late night chat with him.

Here’s a good one: if he doesn’t mind that he’s running late for an appointment because he’s with you, take note.

Guys place a lot of importance on their time. When they put something in their schedule, they mean business.

So if you find yourself in his weekly and/or monthly schedule, he’s trying to tell you something.

4. He’s looking at YOUR calendar 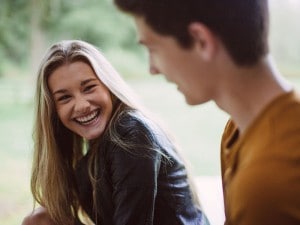 If a man’s time is a sign of his desire, then it makes sense that he’ll be interested in your schedule, too.

He’s going to gently probe of signs that you’re available — or at least open to the idea of spending some one-on-one time with you.

He might throw a few qualifying questions like, “Do you usually chill at home after work or do you like to do something before calling it a day?”

That’s guy-speak for “Please tell me you’re not doing anything and want to hang out with me!”

So you just need to give him the right hint in the form of a response like, “Well, I really don’t have anything planned this weekend …”

It’s every guy’s wish for you to give him a little wiggle room to work with.  So this little sign will be a big favor to him.

By that, I mean he’s keeping a mental ledger of all the things you say, like or do.

Don’t be surprised when those things casually come up in a conversation. He might joke about one of your guilty pleasures or make a reference to an experience you shared with him before.

Point is, if he’s jotting this stuff down is his head, then you KNOW that you matter to him in a big way.

This one’s important. Some men aren’t going to slip in clues under your radar.

They might be a little more in your face about it and openly poke fun at you. He could make some good-spirited jokes at your expense or basically give you a little “crap.”

But he’s not doing it to tick you off or as they say, troll you.

It’s pretty much the same with how kids tease each other in the classroom.

Even as grown-ups, guys still follow the same pattern when they flirt. Be on the lookout for this behavior.

Look, dating and relationships should be, above all, FUN.

Not to get ahead of you, but that sense of levity is important later on when you’ve settled down as an actual couple. Especially when the tough times come along.

So it’s important as early as now that you can show him you’re down to have a little fun as well. It’s all part of the courtship process.

7. He’s Looking At The Competition

It’s most likely that your man’s going to be cool about you having guy friends.

But if you find him asking a little too much when you talk about said friend(s), there could be a good reason for that.

He might want to know, in no uncertain terms, whether you’re taken or not. It’s in the interest of any guy interested in you to find out if he’s got a chance — or needs to move on.

So most men in that position will ask questions around the topic. He might “casually” ask you if you’re close with “that guy” or just acquaintances.

Some guys will try to get a reaction from you to confirm your status. He’ll say something like, “Is your boyfriend into horror movies, too?”

So naturally, you’ll have to respond with “Actually, I don’t have a boyfriend.” (Pretty slick, right?)

Of course, that’s the answer he’s HOPING for.

Now, guys are supposed to make the first move like I said, but it’s still a two-way street. You gotta give as you get in this little game of love. That’s the best way for him to meet you halfway.So when you see him giving you these signs, you need to play ball and give him an appropriate response.

One of the biggest mistakes women make isn’t just missing these signals. It’s also about recognizing the signs but NOT acting on them.

Guys are always assessing their options. If they get the feeling they’re going to get rejected, they’ll pack up and move on.

In time, you’ll develop that internal radar to pick up on these clues. Just remember to respond accordingly, and you’ll be rewarded with his love.