Does your ex hate you?

Wondering why they’re so upset?

Not sure how to make it right?

If your ex hates you right now, but you’re desperate to win them back and get a second chance… you’re in the right place, because that’s what this article is going to be all about.

Can I Still Get My Ex Back If They Hate Me?

It may feel impossible and I won’t sugar coat it, because in some situations, there may not be any hope left but for many of you things aren’t as bad as they seem and starting over with your ex may still be completely possible.

#1 – How Long Has It Been Since Your Breakup?

The amount of time that has passed since your initial breakup can have a major impact on your odds of ever getting back together.

The longer it’s been, and the more you’ve been trying already to get back together without any luck, the tougher it’s going to be to reverse things and win them back.

Along the same lines, your chances are also affected greatly by whether or not your ex has found someone new. I’m not talking about short-term rebound flings here, I’m talking about situations where your ex is now in a new, serious relationship that has lasted at least a month or more already.

In this type of situation — or in any case where your ex is engaged, re-married, or very obviously in love with someone new — things are looking grim and it’s probably time to move on.

If you’ve been completely rude to your ex for years, or if you’ve done all sorts of nasty things to your ex over a long period of time… especially serious stuff such as lying repeatedly or cheating on your ex multiple times then you’re in a difficult situation and you’re facing an uphill battle.

For most of you, likely aren’t quite this bleak. If it’s just one or two things that caused them to hate you, or decide they never want to talk to you again, you’re likely in a better place and have more reason to be optimistic about your chances.

Obviously, the less serious the offence that led to your current situation, the better your odds moving forward.

#4 – How Many Times Has Your Ex Made Their Feelings Clear To You?

This is another factor that can impact your chances of ever getting back together. If your ex has simply told you once in a text message that they’re done with you and don’t want to speak to you again, that’s far less serious than if he or she has repeatedly told you never to contact them again and is straight up hostile towards you.

So, be honest with yourself, and look back on the things your ex has said and done since the breakup. For example, maybe your ex said they “never want to get back together” and told you in no uncertain terms not to try to convince them to take you back.

In my experience, that type of statement is usually more something your ex says because they know how difficult it will be for them to stick to their decision to end the relationship.

Maybe they think that, logically speaking, breaking up is the “right” thing to do, but know it’ll cause them a lot of emotional pain and they’ll be tempted to take you back to numb the heartache.

By telling you that the breakup is final and that they don’t want to hear from you, that’s their way of trying to avoid the temptation of getting back together when they’re heartbroken and missing you like crazy.

On the other hand, if your ex has a good reason to be furious at you, and they’ve repeatedly said they hate you and never want to see you ever again… obviously that’s a different story, and it’s more likely that their comments reflect a deeper anger that you’re unlikely to be able to overcome no matter how hard you try.

#5 – Have You Apologized To Your Ex For Any Wrongdoings?

Finally, ask yourself whether you’ve properly conveyed your regret for whatever you did to make your ex hate you. Have you apologized in a clear, heartfelt way? Does your ex know, without any shred of doubt, that you understand where you went wrong and that you’re truly sorry?

If not, then that is something you will likely need to do before you can have any chance at winning them back.

Now, don’t go overboard here–you don’t want to get down on your knees and repeatedly beg your ex for forgiveness or anything dramatic like that.

A single heartfelt and mature apology is usually the best thing to do… and then, after that, you’ll want to give your ex plenty of time and space to process things and let their negative emotions fade before you try to make any further progress.

How To Change How Your Ex Feels About You

OK, now that you’ve done some soul-searching and answered the questions I just covered — and apologized to your ex before engaging in a period of No Contact — we can talk about how to start turning things around and changing how your ex feels about you.

First of all, employing the No Contact technique is absolutely critical. You need to show your ex you’re not needy, clingy, or desperate for another chance.

If you’re not talking to your ex or communicating with them in any meaningful way, you can’t say or do things to make matters worse.

No Contact also has a number of other benefits that are going to improve your situation as well. I go into more detail here.

If you’ve already finished an extended period of No Contact, or you absolutely must communicate with your ex for some reason… then, at the very least, make sure you don’t have any kind of negative or serious relationship discussions.

If you have to talk with your ex for some reason, keep the encounter fun and upbeat, and don’t bring up anything remotely serious.

Just pretend to be happy and avoid reminding him or her of anything that might trigger negative memories and emotions.

Now, this brings me to a bit of good news… all humans are hard-wired to let go of negative memories and emotions over time. It’s an evolutionary mechanism that’s developed over thousands of years in order to prevent us from becoming depressed forever when something bad happens.

That means your ex will, over time, naturally start to let go of their anger and negative emotions towards you. 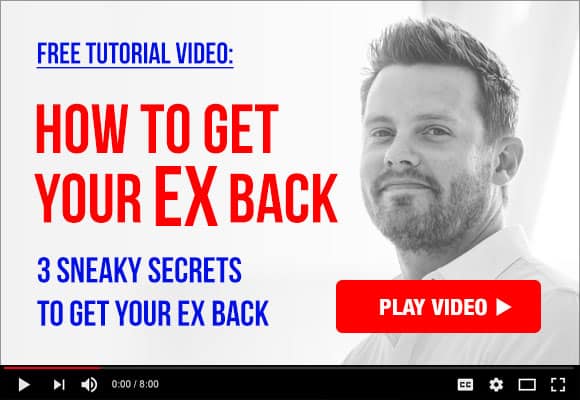 You can also use some of the psychological techniques I describe in the free tutorial video on my website to help speed up this process and change how your ex feels about you and the possibility of a future together. These are ridiculously subtle, under-the-radar tactics–but they definitely do work, as thousands of my past clients can attest.

And finally, once your ex’s emotions and feelings towards you have begun to reset, you can move onto the final phase.

The final phase of re-attraction is going to require you to re-attract your ex all over again.

You need to make them fall back in love with you to the point where their affection and feelings for you override any logical “reasons” for breaking up.

Getting to that point will take some time, and you’ll need to flirt and change your behaviour and outlook on things… and you’ll also need to avoid making any further mistakes along the way.

But once you’ve got your ex feeling that same kind of burning desire that made them want to be with you in the first place, it’s just a matter of saying “yes” when they suggest you give your relationship another chance.

Is It Too Late To Get Your Ex Back?

Make Your Ex Fall Back In Love With You

What If My Ex Finds Someone New During The No Contact Period?