You are here: Home / Breakups / How To Handle An Irritating Ex

If you go through enough breakups, you’ll eventually find yourself trying to fend off an ex.

Sometimes these irritating and persistent ex boyfriends or ex girlfriends begin pestering you right after the breakup, and sometimes it might be years before they suddenly appear with a sudden desire to reconnect.

Whatever the case may be, if an ex of yours happens to be constantly bugging you or trying to get in contact, then you know how difficult it can be to make them give up and leave you alone.  In this post, I’ll offer a few ideas for dealing with your annoying ex. 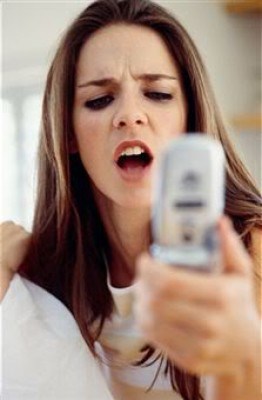 Your Ex Wants to Reunite — You Don’t

You need to use plain language to express your lack of interest.  While I’m someone who actively advises folks on how to get and ex back — and that often involves initiating unsolicited attempts at conversation — I know what it’s like to be on the receiving end, too.

If an ex continually asks you out or tries to get you to talk about your shared romantic history, then the solution is simple:  Tell them, in plain language that can’t be misinterpreted, that you are simply not interested in ever getting back together.

Don’t ignore them, and don’t try to be “gentle” in your replies.  Just say something like, “I’m really sorry, I enjoyed our time together, but I’m not interested in getting back together with you.  I’ve moved on, and I think it’s best if we go our separate ways.”

You need to be clear and consistent in your replies.  Even the most thick-skinned ex will eventually get the message if you reply to texts with “no thanks” and never answer your phone.  The wrong move in this situation is to occasionally be friendly and engage in conversation sometimes — this sends mixed signals, and will encourage your ex to continue reaching out to you.

Be consistent in saying no or not replying, and they’ll soon get tired of trying.

Your Ex Tries to Make You Jealous

Show zero interest in their antics.

While subtly inciting jealousy can be an effective way to get an ex back, it’s also very irritating for the person on the receiving end.  If your ex won’t shut up about their new relationship, or if he / she seems insistent on repeatedly updating their Facebook status to rub it in your face, it’s almost impossible to avoid becoming annoyed.

Simply ignore their attempts altogether.  If they’re constantly posting about new romances on social media, don’t “block” or “delete” them from your friends list — just use the “ignore” or “hide updates” feature to avoid being rude while still making sure you don’t see their activity popping up every time you visit a social media website.

Your Ex Is Persistent to the Point of Obsession

Politely tell them that they need to stop contacting you or you will seek help from law enforcement to make sure they don’t bother you any more.

A polite but blunt reminder that you are willing to impose a “restraining order” against your ex is usually enough to make them quit trying to talk to you.

Don’t send mixed signals, by the way — replying to their messages or answering their calls will only reinforce your ex’s behavior and encourage them to continue.  (It can also nullify any restraining order you might obtain against them).

The moral of the story?  Be blunt with your ex, and don’t send mixed signals.

If you consistently handle them with a general lack of interest and politely shut down any attempts to initiate communication, they’ll almost certainly give up within days.